Energy saving cookstoves are changing the lives of many women in rural and remote parts of Uganda. Ms. Edinavence Kajaribu received a lorena cookstove through Kiyanga Environmental Conservation Association (KECA) in Mitooma.  KECA is one of the recipients of the Small Grants funding ($10,000) from UNDP – Uganda Country Office. 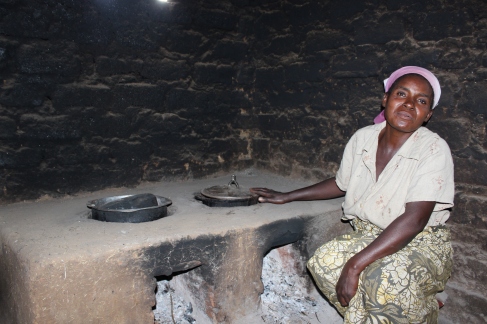 “Now I use one bundle a week instead of 2 bundles,” said Ms.Kajaribu. “It’s faster, I can manage it alone and do other chores as I cook. I only come to the kitchen to check if the food has water.” She quickly adds, “And it has no smoke.”

Edinavence is one of the 24 people that received the lorena cookstoves in Kiyanga sub county. To qualify as a beneficiary one had to have at least a semi-permanent. One also had to be sociable to allow people to visit and see how the stove works.

Kiyanga neighbours two key forests – Karinju and Imaramagambo as well as Queen Elizabeth National Park.  The community has an understanding with the National Forestry Authority (NFA) to pick firewood from the forest not more than once a week.  With the lorena cookstoves it cuts the need to go to the forest for firewood by half.

“I would use one head load of firewood per week but I now use the same bundle for two weeks,” she said.  Ms.Mwanje uses just one block of wood as opposed to the many poles she used when she cooked on the traditional three-stone fire.  “I keep telling the neighbours how the stove has reduced my firewood demand by half,” she said. 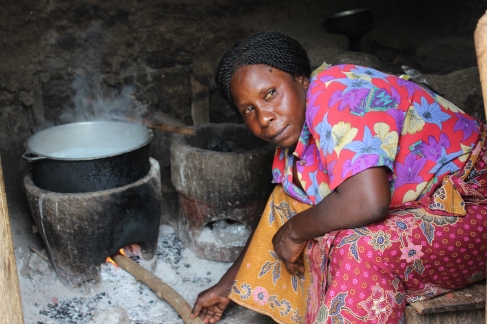 Ms Birungi Mwanje in her kitchen

Kikokiro Savings and Development Group in Wakiso is promoting renewable energy technology in Wakiso. The 25-member group makes briquettes and cookstoves for sale.  Within two months of receiving the $12,000 Small Grants funding, the group made 87 cookstoves as well as 600kg of stick briquettes and 70kg of honeycomb briquettes.

Charcoal briquettes are similar in appearance to ordinary charcoal but are made out of agricultural residues and charcoal waste that would normally be discarded as useless waste.

The group sells the big stoves at 40,000 Uganda shillings ($16) and the small stoves at 25,000 Shs or $10. By mid-October they had sold 400kgs of stick briquettes at 1,000shs a kilo, and 60kg of honeycomb briquettes with one honeycomb selling at 2,000shs.  The group members say the demand for the briquettes is high and the business opportunity is promising. They are now working on making standardized products that can be packaged and sold in supermarkets and many other outlets.

Wide adoption of charcoal briquettes would minimize the heavy dependence on charcoal and firewood that are contributing to wide scale deforestation in Uganda. In addition, money is saved and there is a decrease in common diseases from smoke such as eye infections and asthma. 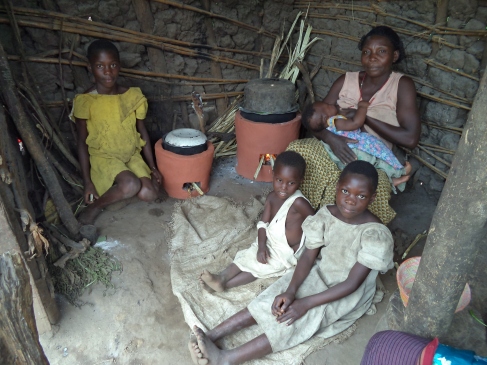 A family that received cookstoves from Katara